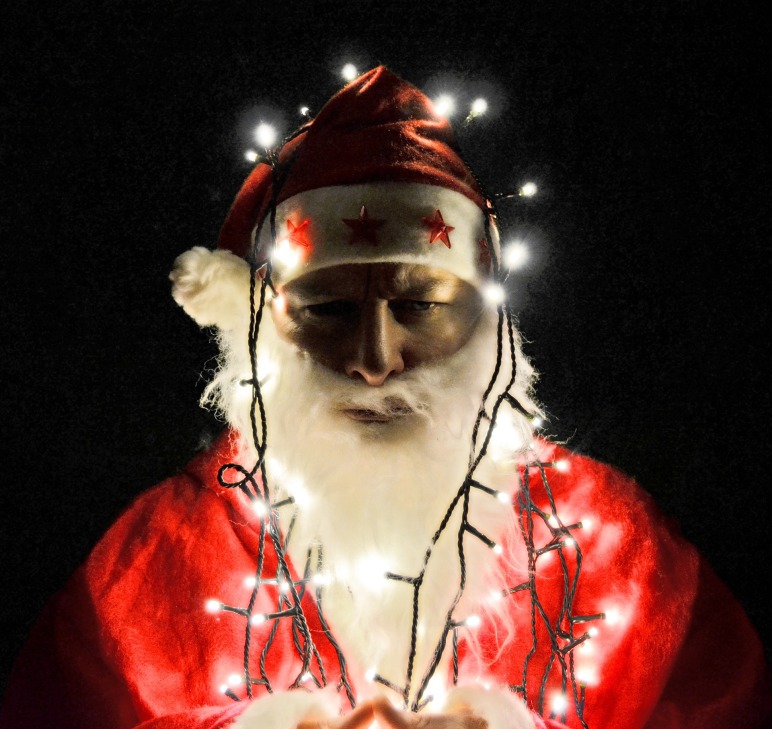 “The only thing we have to fear is fear itself.”

A man in a red suit is approaching your domicile with dogged determination.  The night air is crisp and darkness has just settled in like sand against the light of day.  This man has been busy.  He has been watching your children, closely.  He has been noting their movement and behaviors.  He has granted himself the moral imperative and authority to judge and codify their actions.  Now, he is entering your house, breathing heavily from the exertion of home invasion.  He has gifts, procured according to his intimate knowledge of your now sleeping offspring.  He longs to just open the door and peek at the wee little ones, but his bizarre reverse burglary must continue.  Oh, and he seems to have somehow coerced, manipulated or hypnotized a small army of little people into facilitating these efforts through their close and obedient adherence to his unrelenting bidding.  Pause.  What?! Pause, and scene . . .

If Santa were real, I would have only one question.  Where exactly on the FBI’s Most Wanted list would his name fall? Ok, to be fair, that is not a legitimate question.  Of course, he would be at the top.  An actualized Santa is a haunting and dreadful manifestation.  Creeper.  But why are we not tainted by the fear surrounding this diabolical emissary of “cheer”?  Because we know Santa is not real.  I mean, if we are bringing things to life, can you imagine a real tooth fairy? Shocking and macabre.  I don’t know if I could ever sleep again after discovering the reality of such a carrion creature.  But, I am having too much fun.

Islam is upon us, hoofbeats bearing down upon our doorstep.  Hide your children, hide your wife.  It is easy to sensationalize or satirize this phenomenon.  Make no mistake, there is evil and violence afoot in this world.  People have suffered horrible things, there are surely more horrible things to come.  But ask yourself, do you believe in allah?  Is he, or it, a reigning god.  Or, is allah, like Santa Claus, made up?  An intended tool for societal modification and control, first wielded by Mohammed.  If that is the case, isn’t fearing Islam sort of like fearing Zeus (unless you believe in Zeus)?  Certainly there are many fearsome individuals out there, but they are simply mortal, misguided men.  Their power comes from training, resources, and yes, fear.

The above was written before the Orlando night club massacre, so I just had to take a deep breath before I went back to read it.  This message was intended to be both an indictment of Santa Claus and a defusing of Islamic terror.  I am not sure what it is now, but I believe the above paragraphs still stand true.  I do not think that either Santa Claus or the underpinnings of Islam are real.  So what are we afraid of?  Death.  Yes, to some degree.  But not many stay up late shaking about heart disease.  Yet, this is a massive killer.  Is the suddenness the fear?  Well, brain aneurysms strike with a shocking suddenness, but they haven’t made a lot of newspaper front pages or political speeches.  Remember, as long as we have comfortable couches and visible TV’s getting America to seek paradigm shift will be like convincing an elephant to climb a tree.  Security/Freedom.  It always comes back to that.  That dichotomy will be explored further here in this commentary category.  Light me up with some comments.

One Mountain at a Time

a blog of hope by savannah wall

Author: Words From An Unlikely Poet and the follow up, Further Thoughts.